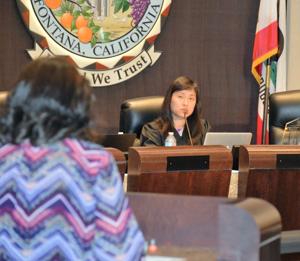 Absurd, immoral, extortion, theft — those were some of the adjectives used by some Fontana residents on July 27 to describe the idea to raise water rates proposed by the Fontana Water Company, a division of the San Gabriel Valley Water Company.

According to the California Public Utilities Commission (CPUC), the Fontana Water Company is requesting a 44.3 percent rate increase in a three-year period, beginning this year, to cover the costs of operating the water system.

According to Joel Reiker, vice president of regulatory affairs for the San Gabriel Valley Water Company, the single largest factor driving the need for a rate increase is the reduced water use caused by conservation. Reiker said the company understands that it may seem unfair, but he assured customers that it is something that has to be done in order to cover the costs of repairs and the replacing of old infrastructure.

“The types of variable costs that decrease during periods of low water usage, such as purchased water, electricity, and chemicals, are relatively small compared to the fixed costs of operating the water system. These fixed costs, which must be paid no matter how much water flows through the system, are similar to a home mortgage or rent payment that does not change based on the number of people living in the home,” said Reiker during a public participation hearing held at City Hall.

“Fontana Water’s fixed costs include the costs of replacing old infrastructure, laying pipe and water mains, building tanks, installing pumping and treatment facilities, and drilling wells, most of which is completely out of sight and out of mind,” Reiker added.

According to the company, which currently serves approximately 45,655 customers, 70 to 80 percent of the costs of operating a water system are fixed and in contrast, Fontana Water’s rates are 70 percent variable to encourage conservation.

“Unfortunately, this means that when customers do the right thing and conserve, rates must be increased to cover the difference,” he added. “But this also means you can lessen the impact of the rate increase by reducing water use even further.”

However, a report completed by the Office of Ratepayer Advocates (ORA) indicates that the proposed increase is too high and instead it should be 21.06 percent in a three-year period.

However, the Fontana residents who packed City Hall during the meeting argued that even a 1 percent increase is too high. Longtime resident Mary Matson said she obeyed state recommendations to save water and instead of receiving a congratulations notice she received an announcement of a proposed fee increase. Matson said the idea is absurd and lacks a valid argument.

Gloria Mathis agreed with Matson and added that thanks to the conservation order, many yards in Fontana are dead, making homes look abandoned.

Garret Strong suggested that the water company should take a reduction in wages to solve the issue, just as other entities have done to avoid financial problems.

Strong added that not everybody in Fontana can afford a 44.3 percent increase, especially those with fixed incomes like senior citizens. Strong dubbed the idea “insane.”

Another resident, Eddie McCloud, said he followed every rule to save water and now the proposal to raise rates is punishing the good citizens.

Kareem Gongora, a member of the Fontana Planning Commission, argued that the proposed idea would severely impact residents’ pockets and suggested a review.

Parks and Recreation Commissioner Carlos Bravo said the issue was caused by bad management and that the company now wants to resolve it on the backs of the residents.

Fontana business owner Frank Montes, current head of the California Hispanic Chamber of Commerce, noted the lack of minority participation at the meeting, referring to Hispanics. Montes asked if a notice in Spanish was sent to homes advising of the meeting.

Administrative Law Judge Pat Tsen said a notice in Spanish was sent and accepted the fact that there is always room for improvement in the engagement process.