Fontana, CA – On Saturday, May 21st, 2016, the Fontana Democratic Club is hosting a canvassing kick-off event in support of Congresswoman Loretta Sanchez (CA-46) campaign to replace retiring United States Senator Barbara Boxer.  Sanchez has served in the United States House of Representatives since 1996, when she unseated six-term Republican incumbent Bob Dornan.  She has since served on Homeland Security and is the second highest ranking Democrat on the Armed Services Committee.

Sanchez will be joined by Congresswoman Norma Torres (CA-31) and Congressman Luis Gutierrez (IL-04).  Prior to Rep. Torres election to Congress in 2014, she served in the State Senate and State Assembly, and as Mayor of Pomona.  Rep. Gutierrez is nationally recognized for his tireless leadership championing Latino and immigrant issues.  He has been at the center of every major legislative debate on immigration reform and immigration issues for more than a dozen years.

“The U.S. Senate is an important race in California and we are excited to have such key figures visiting us in Fontana and engaging with our members,” stated Fontana Democratic Club President Rafael Trujillo.

The canvassing kick-off will take place at Veterans Memorial Park Shelter #2 located at 17255 Merrill Ave, Fontana, CA 92335, from 9am-2pm— light refreshments will be provided.  Guests are asked to bring comfortable attire and invited to canvas the local neighborhood following the kick-off.  For any questions or to RSVP, contact Fontana Democrats at 909-969-4735 or visit www.FontanaDemocrats.org. 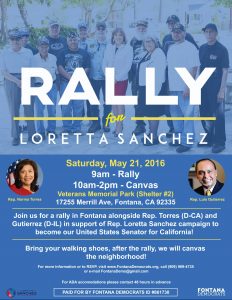