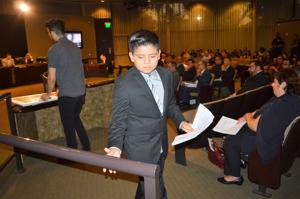 Student Andre Cisneros walks toward the City Council members to give them a letter about making the election district map process fair.  (Herald News photo by Alejandro Cano)

Several area residents spoke out at the June 27 Fontana City Council meeting, expressing concerns about the three choices for the proposed election district maps that are being considered for possible implementation later this year.

The City Council is in the process of conducting a series of public hearings regarding the planned creation of new districts that would be used for residents to cast votes for City Council seats. Under this scenario, the mayoral seat would continue to be elected on an at-large basis.

But the residents who provided public comments argued that the three drafts (known as numbers 3, 4, and 6) that had been proposed do not adequately represent the city’s population and should be redrawn. They suggested that seven districts would be preferable to the current four.

“We have 213,000 residents and we are only growing,” said Glenda Barrillas. “That we are looking into four districts upsets me. The needs of the communities are different in each side of town. I thought Fontana was a leader, so why are we limiting our leadership?”

Councilmember John Roberts thanked the residents for their ideas and said he is willing to consider all proposals, and other councilmembers agreed that public input is important.

The next public hearing on this issue will be held during the meeting on Tuesday, July 25, and more comments from residents can be made at that time. On Aug. 8, the City Council is scheduled to introduce an election district ordinance, but the vote could be postponed and additional hearings could be held instead, if deemed necessary.

Residents who spoke at the meeting said that the city should make more of an effort to promote this important process.

“Most community members of the city are completely unaware this is taking place. There has been no attempt to distribute literature in languages that may aid the non-English speaking community of Fontana,” said Ivan-Nicolas Cisneros.

Cisneros said the City Council moved behind closed doors to create a four-district map despite arguments against it and arguments suggesting a smaller councilmember-to-electorate ratio.

“The City Council has behind closed doors determined to only make draft options 3, 4 and 6 publicly available. As observed on June 26, the community centers such as Jessie Turner had no physical documents posted. I request options 1, 2 and 5 be made available and distributed via mail and posted at every community center,” said Cisneros.

In a letter given to the City Council, 10-year-old Andre Cisneros, a Wayne Ruble Middle School student, said that the boundaries should be decided in a manner that is “fair to the people of Fontana.” He said that there should be more input from the community and more transparency in the process.

In previous years, Fontana had conducted City Council elections on an at-large basis, meaning that all voters can cast ballots for any candidate, no matter where the candidate resides within the city limits.

However, back on Aug. 31 of last year, the city received a letter from attorney Kevin Shenkman which alleged that the city’s current at-large voting process violates the CVRA, a state law which was enacted in 2002. The CVRA makes it easier for minority groups to sue government entities that use at-large elections on the grounds that they dilute the strength of minority voters. So in order to avoid costly litigation, the City Council voted to begin the process of establishing four election districts.